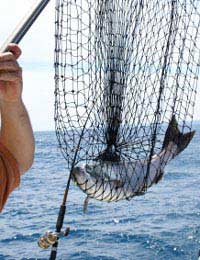 If you see living on a boat as a retreat to a more natural and self-sufficient way of life then why not try catching your own supper.

The fishing chiefly practiced on the rivers and canals of Britain is coarse fishing. Coarse refers to freshwater fish than aren’t game, and can include carp, pike, perch, breach and eels.

The actual type of fishing best suited to beginners is that using a float. The role of the float is to both suspend the bait at a predetermined depth and to act as a bite indicator. With its bright tip, the float can be easily seen as it bobs on the water surface so that if a fish then bites on your hook and tries to swim away the float will be pulled under water and you will know immediately that you have caught a fish.

There are various types of floats available but as a general guide there are chiefly stick floats and wagglers. The former are for rivers and the latter are for still waters and rivers.

Fishing is an art, but it’s also a science in that it requires the right equipment to achieve the desired result. So if you are serious about taking up this pursuit it’s important that you first kit yourself out with the correct tackle.

The best way to obtain the necessary equipment is to visit your local tackle shop and ask for advice on what you will need to get started float fishing. As you shouldn’t be investing in a sophisticated rod and reel at this early phase of your hobby, you shouldn’t expect to pay more than £50 for your complete kit.

You will likely come away from the shop clutching such key items as a float rod, a reel, a strain line, hooks, selection of floats, a plummet, bait (maggots), catapult, landing net and pole, and a box of split shot.

Before then heading down to the waterside to try out your new wares it is important that you also first invest in an Environmental Agency rod licence. These are available online from their own website or at any local post office.

To begin you will need to firstly prepare your tackle. You should start by fitting your rod together, making sure the ring guides are all lined up. The reel will then need to be attached to the rod at the top of its handle with the reel spool aligned with rod’s own line guide. The bale-arm of the reel then needs to be opened and the line threaded carefully through each of the line guides.

The float is attached by threading the line through the small eye at its base. To make the float sit at naturally in the water you will then need to add the split shot, a process known as ‘shotting’ or ‘cocking the float’. The float will come with a guide telling you how much split shot you need. Next, take a ready-tied hook to nylon and tie it to the end of the line.

Following this you will then need to find out how deep the water is, or ‘plumb’ the depth. Attach the plummet to the hook and allow it to hang beneath the float, and then gently swing the plummet into the intended fishing area. Depending on whether it is set too shallow or too deep, the float will either sink or lie flat on the water.

Pull the rig back in and, by sliding the float up and down the line, alter it accordingly until the perfect depth is achieved. Bear in mind that the hook should lie either on the bottom or slightly above it, and that only the float’s painted tip should be visible above the water line. Once the plummet is removed you are ready to fish.

You should fish from a seated position, but not on the bank, instead either on a chair or a box. The rod rest should be inserted directly in front of you so that once the rod is placed on it, with its butt resting on your knee, the rod tip will be just touching the water. The landing net needs to be set up ready and both the catapult and bait should ready at hand.

It is recommended to begin a session by first throwing six to ten maggots into the water every few minutes in order to get the fish accustomed to the bait. Once you’ve finished ‘feeding’, attach one or two maggots to your hook and then cast off into the water. The only thing you then need to do is to keep watch on your float and get ready to strike when it plunges into action.

The Right Fuel to Cook Onboard a Boat