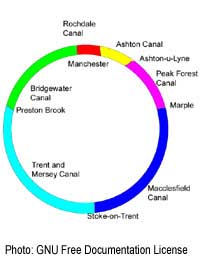 In presenting sample bites of the waterway system, Britain’s canal cruising rings are ideal for one or two week long holiday voyages.

The Potential for Unlimited Exploration

Cruising rings - canals that link up to form a complete circular course - have in theory been in existence ever since canals started to criss-cross with one another. However, scenic roundabout routes would have hardly been a welcome option for the system’s original working users who were more interested in getting from A to B as quickly as possible than marvelling at the array of sights on route.

With efficiency no longer a priority, the enormous potential for varied routes offered by the dense overlapping network was only tapped when leisure cruisers began exploring the system.

Much like hiking trails, cruising rings are essentially pre-defined routes designed to offer newer explorers an approved course that will guarantee a range of interesting local sights within in a manageable time span.

Of course, much like with hiking, there are those that prefer to find their own way - even if it is at the risk of getting lost or missing out on some navigational landmarks. Seasoned boaters, such as liveaboards, may have found their canal legs following a cruising ring but will likely have long since discovered their own.

Cruising rings are ideal for holiday hire cruises. Rather than follow one canal and turn back once half the trip is up, their journey offers a selection box of canals, allowing boaters to sample a variety of waterways, each with their own particular characteristics, history and atmosphere, before ending back at square one.

The Cheshire Ring is credited with being the first official ring because it was in reference to this route – as part of successful campaigns to restore key sections - that in 1965 the Inland Waterways Association first coined the now ubiquitous term.

Since it was re-opened for navigation in 1974, the Cheshire circuit has become a popular one for holiday boaters because it takes around a week to complete and during that time offers six different canals – including the first modern canal in the Bridgewater – as well as the contrasting scenery of Manchester city centre, the Peak District and the Cheshire Plain.

Which Ring to Choose?

Since the foundation of the Cheshire Ring, numerous other official circuits have been created, including the Black Country Ring, the Avon Ring, Two Roses Ring and the Four Counties Ring. These evocatively named circuits are not re-tracings of historic trails but simply modern routes created to promote and make best use of canal holiday travel.

As they offer a taster of a particular area’s diverse surroundings – drifting on through cities, open meadows, market towns, dramatic hillsides - cruising rings are best chosen by the region through which they traverse, rather than for any one attraction.

The South Pennine Ring, for example, is not only a great way to experience the breathtaking scenery of the “backbone of England” but also two contrasting urban settlements that reside either side, namely Manchester and Huddersfield.

In taking in the wide Grand Union Canal, the magnificent River Thames and the narrow Oxford Canal, the mighty Thames Ring offers sample selection of different waterways to try out in addition to the varied sights of Berkshire and Oxfordshire.

Nevertheless there are certain rings that are defined by more prevalent characteristics.

The full Stourport Ring, for instance, may offer some wildlife sites and choice Worcestershire countryside but it is a route largely defined by its strong urban flavour, as it weaves through the three distinctly differing cities of Wolverhampton, Worcester and Birmingham.

Those attracted by Britain’s industrial history will find much to savour on the various rings that pass through the old industrial metropolis of Birmingham, which famously has more canals than Venice.

The Birmingham Ring itself is the obvious choice but as is typical with the ring routes even this offers green relief as it meanders out into the countryside via the quiet and rather pretty Wyrley & Essington Canal.

For those travellers that have chosen the narrowboat as a means of escaping the cityscape then there are also rings that are predominantly rural.

Taking in swathes of idyllic rolling countryside, as well as some choice olde English towns, as it weaves through Cheshire, Staffordshire, Shropshire and the West Midlands, the popular and relaxing Four Counties Ring is one for the connoisseurs of England’s green and pleasant land.

Further rural relaxation can be found on the Leicestershire and Warwickshire Rings. The Leicestershire loop includes including two rivers in the Trent and Soar, and both broad and narrow canals, and the famous Foxton staircase locks.

The Warwickshire has lush meadows and pastures in abundance but also offers less wholesome delights in its passage alongside Cadbury World and Tamworth’s Snowdome.