Home > Safety & Security > How To Deal With The 'Man Overboard' Emergency 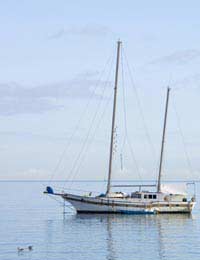 If there’s a ‘man overboard’ emergency, the procedures for rescue are going to be fairly similar whether you’re on a shallow river, a deeper waterway or even on the open sea, although the degree of difficulty in deploying the rescue will obviously become greater if you’re out on the open sea in choppy waters with strong tidal currents.

Nevertheless, in all situations of ‘man overboard’ the important thing is not to panic and to follow procedures which you should have become familiarised with before you’ve even set sail and perhaps have even practised.

It all begins with being aware that someone has fallen into the water. As soon as this happens, alert the rest of the people on the boat by yelling ‘MAN OVERBOARD’. This is especially important for the person driving the boat (the skipper) as they are going to need to play a critical role in any rescue.

At the same time, ensure that you keep your eye on the person in the water at all times. Keep pointing at them even as the skipper is preparing to manoeuvre the boat in order to attempt a rescue.

Throw the person a lifebelt or, if there is more than one on board, throw extras or even lifejackets in addition to the lifebelt if you only have one of those. This will not only give the person more chance of getting hold of something to keep them afloat but will also help with locating the victim should they disappear out of sight at all if you’ve several flotation devices in the area in which you’ve last spotted the victim as it may help lead a trail to the victim.

What The Skipper Must & Must Not Do

Firstly, the boat’s engine should be turned off. Do not reverse the boat as the victim could be sucked into the propeller. Turn the boat around and hopefully the victim will have been able to grab hold of a lifebelt from which you can then tow them back in towards the boat and haul them back on board.

If you can’t physically reach them with your bare hands, you’ll need to use the likes of a rope, pole or ladder to assist you in getting them back on board.

Once you’ve got the person back on board, you may need to administer first aid so someone, and preferably more than one person on board, should be a qualified first aider as the victim may be injured, in shock, exhausted or even suffering from hypothermia so you’ll need to know how to deal with all of these kind of things.

As a Last Resort

In spite of what your natural instincts might be, you should never jump into the water yourself in a ‘man overboard’ situation except as a last resort which might occur if you cannot spot the victim or they’ve been unable to get hold of the lifebelt and appear to be struggling to stay afloat. In this instance, the person who is going to enter the water should ensure that they are wearing a lifejacket which has a line attached between it and the boat.

Remember too that it might be the skipper who falls overboard so it’s always a good idea to practice what you would do in a ‘man overboard’ situation and that there is always someone on board, apart from the skipper, who knows how to manoeuvre the boat and the rules regarding the stopping of the engine and the dangers of the propeller in the event that should occur.

Safety & Survival Gear For Your Boat