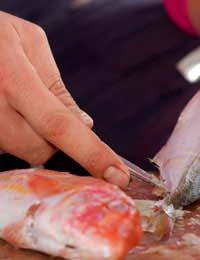 One of the attractions of living on a boat for some people is that they can go fishing and then cook themselves a nice fish supper. However, you need to ensure that you keep, prepare and cook the fish properly.

Once The Fish Has Been Landed

Once you have landed the fish and killed it humanely, put it into a bucket of fresh, clean water or hose it down to remove any of the slime and potential bacteria that may be on its surface. To keep it well preserved, if you’re not going to prepare it straight away, you should store it in a cooler containing some ice.

Cleaning And Gutting The Fish

Although a fish’s tissues are sterile, its scales can contain several different types of bacteria so before gutting it, wipe it down with some water, preferably chlorinated. It’s important you do this gently as if you’re rough you can tear the flesh which can allow any remaining bacteria to get inside.

There are many different methods to gut a fish. Some people prefer to leave the head on at this stage and lay the fish on its side. Then working from the tail end and up through the backbone by inserting a sharp knife, work your way up to the gills. Then if you twist the head just slightly and pull, the entrails should just be able to be pulled out.

Some people prefer to cut the head off first which you do by slicing it off at the gills and others will start at the top and work their way down. Also, use a fork to scrape the backbone of the fish to get rid of its blood vein. Once you have done this, rinse the fish out with clean water and then cut off the fins. There is no specific order you should do all this, however.

You don’t always have to descale a fish before you cook it but if you want to do that too, just run a knife against the scales from the tail to its head on both sides. This can be a bit messy so it’s better to do this on a clean surface outside on deck than to make a mess of the galley.

Fish can be cooked in many different ways. For example, you can pan fry it, put it on a barbecue wrapped in foil or boil, steam or grill it to name just a few methods You don’t want to overcook it though as it will lose a lot of its flavour. The length of time will depend on the size of the fish and the method you are using to cook it. Probably the easiest way is to buy a book containing different recipes. Some people suggest cooking fish for 10 minutes for each inch of fish, or 15 minutes per inch if it’s wrapped in foil but that’s not going to work in all methods of cooking.

Fish keeps very well when frozen and whilst you can cook from frozen, it’s far better to let the fish thaw out naturally first, preferably by leaving it to thaw in a fridge for 24 hours.

Whenever you go fishing on a boat trip, however, always ensure that you have permission to fish and that you're allowed to keep your catch.